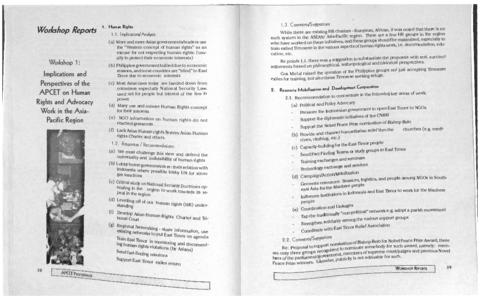 About IID
Established in 1988, the Initiatives for International Dialogue (IID) is a Philippines-based advocacy institution promoting human security, democratization and people-to-people solidarity. IID conducts policy advocacy and campaign programs on Burma, Mindanao, Southern Thailand, West Papua, and East Timor. It established the Asia-Pacific Coalition for East Timor (APCET) in 1994 that spearheaded a regional people’s solidarity movement for the then occupied nation. In 2000, it established the Mindanao Peoples Caucus (MPC) – a platform and network of grassroots organizations, communities and NGOs affected and engaged in the conflict in Mindanao. MPC meanwhile established the “Bantay Ceasefire” (Ceasefire Watch) a network of civilians in the conflict areas monitoring the implementation of the official ceasefire agreement between the Government of the Philippines (GPH) and the Moro Islamic Liberation Front (MILF). And together with other peace networks, IID led the establishment of the Mindanao Peaceweavers (MPW), the broadest peace network for Mindanao in the country and currently serves as its secretariat.

IID is also the secretariat of the Asia-Pacific Solidarity Coalition (APSOC), Global Partnership for the Prevention of Armed Conflict – Southeast Asia (GPPAC-SEA), and the Free Burma Coalition (FBC) –Philippines. IID is a co-founder and steering committee member of the Alternative ASEAN Network for Burma (ALTSEAN-Burma) and the World Forum for Democratization in Asia (WFDA); a working group member of the Burma Partnership (BP) and was a lead member of the National Organizing Committee of the Philippine Parliamentarian Caucus on Democracy in Myanmar. IID is also Founding Steering Committee member of the International Coalition for the Responsibility to Protect (ICRtoP).

IID’s network and coalition-building thrust reflects its grounded and broad presence in both the macro (regional, international) and local (MPC, MPW) arenas.

The networks and linkages IID have established or become a part of reflects the breadth and depth of IID’s engagement in varying levels and arenas– be they local, national, regional or global. IID plays a key role in most of these networks being the secretariat of GPPAC-SEA, MPW, APSOC, Asian Circle 1325, FBC-P; its Executive Director elected as Co-Chair of GPPAC and as a founding Steering Committee member of WFDA, SAPA, ALTSEAN, and ICRtoP.

IID is also active in BP as a working group member, in the annual ASEAN Civil Society Conference (ACSC) that shadow the ASEAN summits, a convenor of the Waging Peace Philippines and Kilos Kapayapaan at Katarungan (KILOS- Act for Peace and Justice), which is currently the broadest network of peace-builders in the country.

Workshop 1 report: Implications and Perspectives of the APCET on Human Rights and Advocacy Work in the Asia-Pacific Region

This report contains seven (7) section headings each with a minimum of 2 sub-section headings.
The headings are:
• Human rights
• Resource Mobilisation and Development Cooperation
• Church Solidarity
• Women
• Indigenous peoples
• People’s Diplomacy, Education and Information Campaigns
• Legal aspects in East Timor
Each section contains sub-sections that outline the details of the issue at stake and provide recommendations, based on workshop proceedings, of the APCET on these subjects.

This report delineates the composition of the workshop (Organisations and countries of origin), the five (5) areas of concern it addressed and how these categories were distributed among three separate workshop groups. It then describes the results and suggestions of the three workshop groups (A,B and C) aiming to identify and address the areas of concern