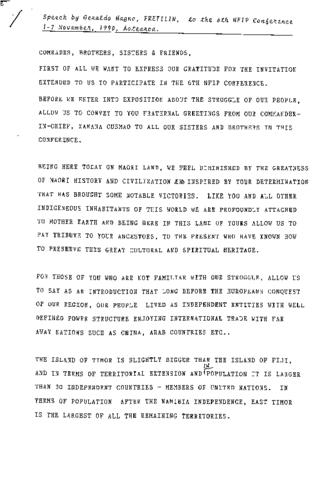 Note provided by the organization, original at http://pacificpeoplespartnership.org/history/

Pacific Peoples’ Partnership has been a guest upon Lekwungen territory for over forty years.

Our organization was born during a time of widespread social concern over nuclear testing in the Pacific. A small group of North Americans were motivated to act in solidarity with Pacific Island communities. They came together in 1975 to establish the South Pacific Peoples’ Foundation (SPPF), which would one day be known as Pacific Peoples’ Partnership.

A Canadian solidarity partner of the Independent and Nuclear Free Pacific Movement, SPPF’s relationships in the South Pacific accelerated with anti-nuclear activism, Indigenous empowerment movements, and the beginnings of environmental networking. SPPF carved out its niche at the forefront of a movement toward placing Indigenous community knowledge and leadership at the centre of development efforts. The organization also helped cultivate Canadian awareness of the complexity and cultural diversity of the South Pacific.

It was no small undertaking to raise the profile of Pacific issues. Most Pacific Island states had slowly achieved their independence only to find themselves either entirely ignored by the international community after WWII. Canadian foreign policy makers generally assumed there were no problems in the South Pacific—or, if there were, Australia and New Zealand would handle them. Over time, SPPF demonstrated that Pacific issues warranted more Canadian attention and that Canadians could have a positive impact in the region.

SPPF became just what it set out to be—the Canadian organization superbly knowledgeable about and connected with the Pacific Islands.

At the same time, SPPF was also situated in the territories of the Esquimalt and Songhees Nations. Over many years, the remarkable similarities between the pressures on Indigenous communities in the North and South Pacific became increasingly apparent.

SPPF embarked on a creative new initiative: Indigenous youth internships in the Pacific Islands. At the same time, SPPF was also working with Indigenous communities in Papua, the Indonesian-administered half of the island of New Guinea. This shift in focus beyond the South Pacific fuelled much soul-searching about the work SPPF was being called to do.

After much reflection, the more inclusive name Pacific Peoples’ Partnership (PPP) was unveiled, embracing our unique emerging role as a leader in North-South Indigenous linking. Since then, many cross-cultural exchanges of artists and youth have helped articulate a wider and more participatory vision in the development of Indigenous Pacific communities.

PPP’s forty year history is a testament to our strong vision and commitment to making an impact with our Indigenous partners. In many ways, the South Pacific is still forgotten in an increasingly globalized world. Yet with rising sea levels and climate change, this region needs the world’s attention now more than ever.

And so, as the only Canadian NGO dedicated to the peoples of the South Pacific, PPP is more committed than ever to keeping these islands on the map.