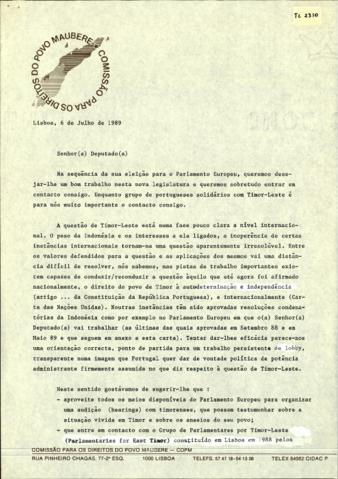 Letter to the recently-elected European Deputies, in private, congratulating them on their election and asking for total support in placing importance on the cause of East Timor in the Parliament. CDPM suggests some specific actions that the deputies can take in order to give more international visibility to East Timor: i. Using all possible means available through the Parliament to organize a hearing with Timorese people who could testify to the situation in East Timor; ii. Contacting Parliamentary Groups from East Timor constituted in Lisbon because this group could help on the conduct of effective lobbying efforts; iii. To sensitize the whole of European Parliament through a strong position and information about what is going on East Timor.