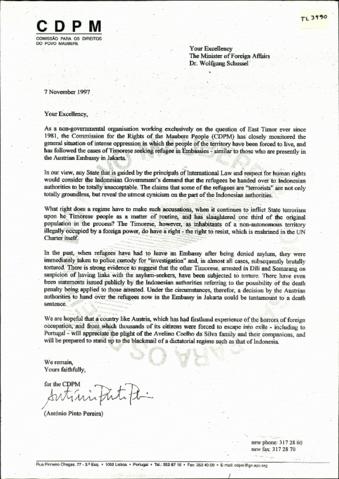 Letter by CDPM to the Ministry of Foreign Affairs of Austria regarding the Timorese who were asking for refugee status, such as those who are refugees in Austria’s embassy, and appealing that “any State that is guided by the principles of International Law and respect for human rights would consider the Indonesian Government’s demand that refugees be handed over to Indonesia authorities to be totally unacceptable.” The letter invites the Austrian government to be prepared and to stand up to the blackmail of a dictatorial regime such as that of Indonesia.