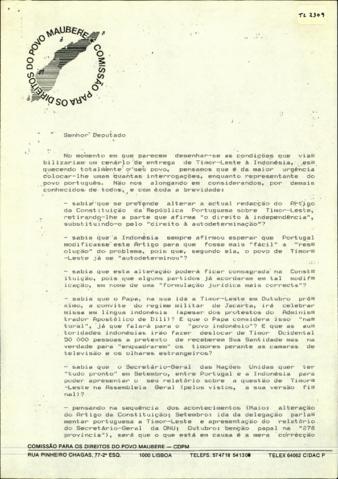 Letter by CDPM addressed to the Portuguese deputies expressing their concern for the possible modification in the wording of a constitutional article regarding East Timor from “recognize the right of Independence” to “recognize the right of self-determination”, and stating that Indonesia always wanted this change in the Portuguese Constitution because it would be easier to prove that East Timor was already self-determined and easier to kill the Timorese discourse of the struggle for independence. The letter also informs that the Pope, on his visit to East Timor, is planning to celebrate a service in Indonesian, and despite the protest of the Apostolic Administrator of Dili, it has been considered normal by the Vatican, since he argues that he will talk to the Indonesian people there. The letter also shows its worries on the UN Secretary General desire to “have everything settled up” between Indonesia and Portugal before presenting his final report to the General Assembly. Finally, the letter connects these events and affirms that it is not a “small juridical correction” (as it has been argued) of the Constitution, but instead, a political choice that should concern all the deputies; in light of this, the letter asks for the deputies' solidarity and support regarding this situation.