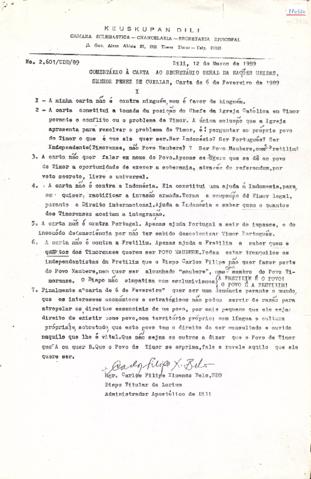 Official title: Comentario a carta ao Secretario Geral das Nacoes Unidas de 6 de Fevereiro de 1989
Contents: Open letter to the population of East Timor clarifying that the previous letter sent to the Secretary General of the UN is not a letter in opposition to anyone, nor in favor of anyone, and is just the position of the Catholic Church in appealing to a neutral international organization to propose a referendum. The letter is not against Indonesia, nor against FRETILIN, nor against Portugal; it is simply a denouncement of economic interests overlapping the essential rights of the people.