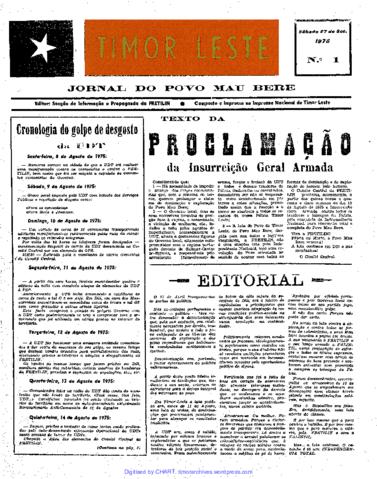 Journal "Timor Leste" no. 1, September 27, 1975
This issue contains: the insurrection declaration made by FRETILIN on the name of the Timorese people, which they consider was being violated by UDT. They describe that organization as “agents of imperialism”, and state that there are no other paths for total independence of East Timor other than a revolution. It also contains the declaration of the Timorese Armed Forces stating that they are a nonpartisan organization, but under the circumstances and realizing the characteristics of FRETILIN and UDT, they would have to choose the side of the former. The main article brings up the importance of the revolution to East Timor, remarking that FRETILIN’s main objective is to build a Timorese society without agents that exploit the people. At the end, there is a text written by the Popular Organization for the Timor Women, discussing the role of the Timorese women in the revolution.