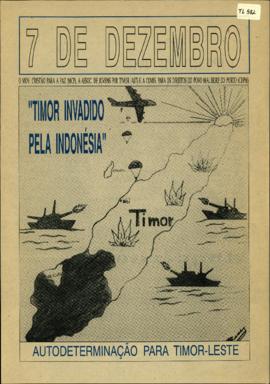 Official title: Timor invadido pela Indoensia – Autedeterminacao para Timor Leste
Contents: Newspaper discussing several different issues related to East Timor.
Main topics: background of East Timor struggle; the capture of Xanana Gusmao; interview with people from civil society about simple questions related to the invasion; new deal between British and Indonesia regarding the sale of weapons; judgment of 08 Timorese and the unfair sentences given to them; in contrast with the unpunished treatment given to some militaries involved with the Santa Cruz Massacre; meeting of 60 people, from 15 different countries, specialized in Law and East Timor issues to debate the establishment of a platform of jurists that could contribute to the end of Indonesian occupation of East Timor; possibilities for the future of the territory; epistemological debate regarding the world Maubere; reflections on International Law and International Order and how they impact the most vulnerable countries; etc. 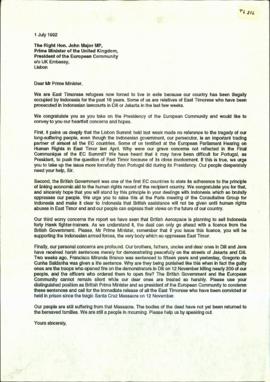 The East Timorese refugees writing this letter convey the following concerns to John Major: they ask why the situation in East Timor was not brought up during the Lisbon Summit; the writers ask that John Major ensures that Indonesia will not receive economic assistance from Britain until human rights violations in East Timor end; they urge that the British government does not agree to sell forty Hawk fighter-trainers to Indonesia; the writers call for the British Prime Minister to use his authority to aid those who have been imprisoned in the Santa Cruz Massacre. 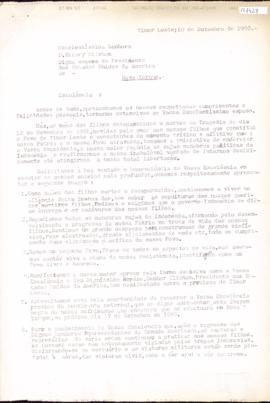 This document contains two letters. One letter (written in 1993-09-17) is written by Catherine Scott from the Catholic Institute for International Relations and sent to Luisa Pereira from CDPM. The letter by Catherine Scott contains a list of the people detained following the demonstration at Bishop Belo’s residence in East Timor. The other letter (written in 1993-09-10), which Catherine Scott had attached, is directed to Hillary Clinton from the Timorese mothers of those that have either disappeared, were captured or killed following the Santa Cruz Massacre. The mothers express their sorrow for their lost ones, state some human rights violations that are occurring in East Timor, and ask for recognition and action from the international community.