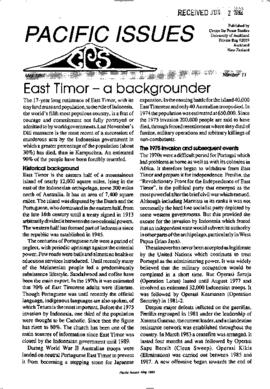 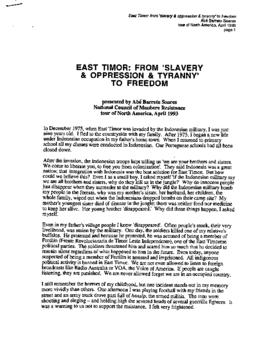 Titled, East Timor: From ‘slavery & oppression & tyranny to freedom, it was presented by Abé Barreto Soares during the National Council of Maubere Resistance (CNRM) tour of North America, April 1993. It begins with Soares’ description of his experience and observations after the Indonesia military invaded East Timor in December of 1975. Soares explains his decision to join Renetil, the East Timorese students’ resistance organisation at Java’s Gadjah Mada University. He explains that the Santa Cruz massacre and subsequent arrest of his friends of Renetil compelled him to seek asylum in Canada. Next, he explains that although he does not fear arrest for speaking out, he worries about repercussions for his family and friends in East Timor. He then dispels the Indonesian narrative that the Timorese voted to become the 27th province of the Republic of Indonesia. Finally, Soares discusses the legacy of the Santa Cruz massacre and reminds listeners that the struggle against Indonesian occupation and human rights abuses will continue in East Timor so long as the Indonesian military remains in there. 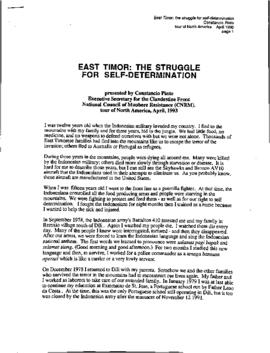 East Timor: The struggle for self-determination

This document was sourced from Pacific Peoples’ Partnership (PPP).
Titled, East Timor: the struggle for self-determination, it was presented by Constancio Pinto, Executive Secretary for the Clandestine Front during the National Council of Maubere Resistance (CNRM) tour of North America, April 1993. Pinto’s presentation begins with his description of his experience during the Indonesian invasion of East Timor. He then presents his time in the Maubere resistance. He describes his arrest, beating and interrogation by the Indonesian military as well as the condition of other political prisoners in Indonesian jail. Next, he discusses the expectations of the East Timorese for the visit of the Portuguese parliamentary delegation. He then describes preparations for a march on November 12, 1991 at Santa Cruz cemetery. He gives an eyewitness account of the shooting of demonstrators by the Indonesian military during the march. He then describes his escape from East Timor. Finally, he emphasises that the East Timorese victory against the Indonesians must be a political and not a military victory, calls for an end to North American military and economic aid to Indonesia until it ends its occupation of Timor, and emphasises the Timorese desire to join in talks hosted by the UN Secretary General between Portugal and Indonesia in Rome on April 21st, 1993. 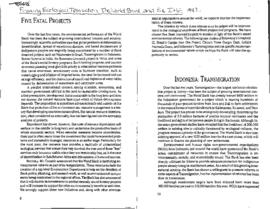 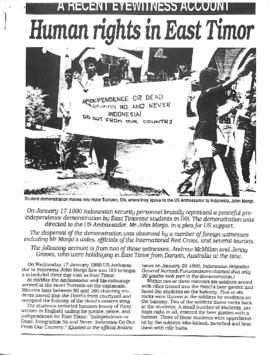 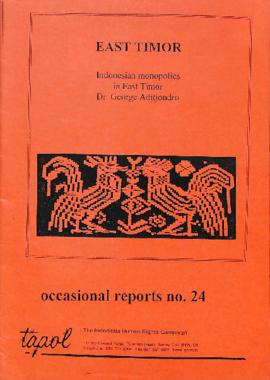 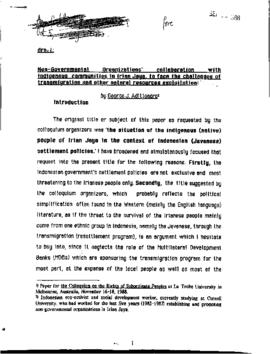 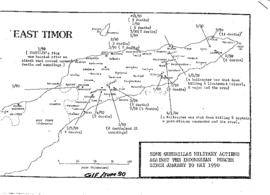 This document was sourced from Pacific Peoples’ Partnership (PPP).
Titled, Some Guerillas Military Actions against the Indonesian Forces since January to May 1990, the source provides a map of East Timor that indicates the date and locations of several battles between FRETILIN and the Indonesian military. The death tolls and other details are also indicated for some of the battles. The next section of the document is titled, List of the Indonesian Battallions operating in East Timor that we could afford to identify. It lists Battalions with their number and place of operation.