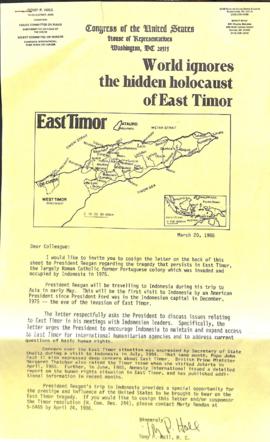 The file consists of documents pertaining to the United States Congress and its interactions and involvement with East Timor from 1985 and 1986. It consists of press clippings, the official Congressional Record, a report, correspondence, press releases, and a Resolution to express the sense of Congress regarding East Timor.

Various documents regarding the United States Special Committee on Decolonization: Session on East Timor from 1987 to 1997. The file includes statements from members of support groups for East Timor.

The Unknown Indonesia by Thomas Fenton
An essay about Indonesia and how little of its history is known.

Various documents about the Museum for Textiles in Toronto. The Museum of Textiles is a non-profit educational organization incorporated in 1975.
This item includes
The Legend of the Crocodile
Examples of textiles from Timor
East-Timor; The Survival of a Vision
The Buffalo and the Princess (Timorese folktale)
A Swedish magazine: Forintesle i Paradiset
A story of a Quail and a Rat

Canada was sending a "Team Canada" to Indonesia for trading purposes and ETAN was urging them to prioritize human rights while on their trip.