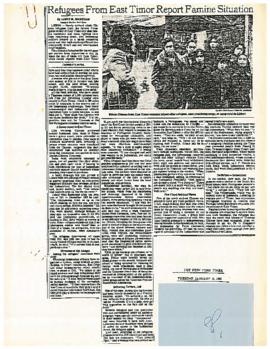 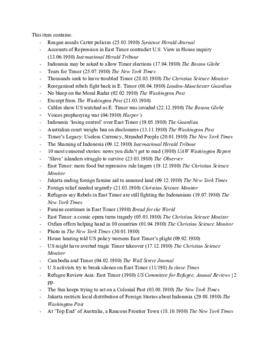 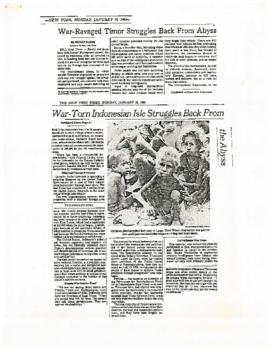 Arnold Kohen founded The Humanitarian Project, with support from figures such as Anderson, Bishop Paul Moore Jr of New York, and others. He worked with NBC as an investigative reporter, and was influential from 1979 onward in getting Timor-Leste into the editorial and news pages of US mainstream media outlets including The New York Times, The Washington Post, The Christian Science Monitor, The Boston Globe and many other publications. His advocacy work in the US Congress involved several figures, including Democratic Congressman Tony Hall, Democratic Senators Paul Tsongas and Carl Levin, Republican Senator Dave Durenberger and later, Republican Senator Malcolm Wallop. Globally, he was active in networks starting with the first international conference on East Timor held in Lisbon in May 1979 and including the Christian Consultation on East Timor network.

In addition to his own work, Kohen was at the centre of a number of networks, making him one of the world’s most-connected Timor advocates. The political range included Noam Chomsky on the Left to former Reagan Administration National Security Advisor William Clark on the Right. The collection thus represents a remarkable record of Timor advocacy and documentation in the USA and internationally.

Materials in this collection relate to Kohen’s Timor advocacy from 1975 to about 2007, covering the period of Indonesian occupation (1975-99) plus a box of additional
materials for the years after 1999. The collection comprises 15 boxes now at Bishop’s University in Quebec. Two boxes of additional material are expected in May 2019.

One of the 15 boxes is made up of records supplied by Martin Rendon, aide to Representative Tony Hall and longtime Timor supporter. One additional box is made up of 1975—1984 materials from Daniel Southerland, former diplomatic correspondent for the Christian Science Monitor and one of the most respected foreign affairs journalists of his generation. Both were close associates of Kohen and both boxes relate to Timor-Leste. The remaining boxes are Kohen’s own papers. They are in the process of being described at Bishop’s.

Current;y, the originals are found at Bishop's University.